Skip to main content
Important: You’re getting ready to leave the Fulton Bank website for a 3rd party website. We have provided this link for your convenience but do not endorse or guarantee the links, privacy, or security policies of this website.
Continue to 3rd party Stay on Fulton Bank
Home / Commercial / Spotlight On Industries / Customer Story: Horizon House & Fulton Bank

Horizon House Invests in the Future of West Philadelphia

Great partnerships are critical for institutions and companies to make their goals and aspirations happen.  Horizon House, a respected  non-profit based in Philadelphia needed a banking partner to help finance a new center of quality childcare, workforce development, and behavioral health. This case study details how Fulton Bank provided a $26 million credit package to make it happen. 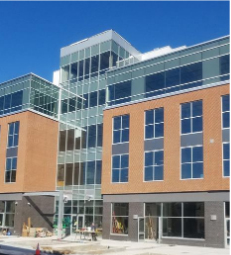 Since 1952, Horizon House has been a resource for adults with psychiatric or developmental disabilities, drug and alcohol addictions, and/or homelessness, serving more than 5,000 adults annually in Pennsylvania and Delaware.

For more than 30 years, Horizon House’s headquarters has resided at 120 S. 30th Street. In 2017, the organization embarked on a search for its expanding operation and 300 staff members–a community hub where it could offer its services, while strengthening its commitment to the revitalization of Philadelphia. Horizon House found that home via a unique joint venture opportunity–one that would have a critical impact on the organization’s future.

By partnering with the Mission First Housing Group in this venture, Horizon House could play a significant role in the revitalization of the West Philadelphia Community. But the organization needed to do two things: 1.) sell its property at 30th street; and 2.) secure $11 million in financing to make this dream a reality. And their current lending partner had been acquired by a bank that didn’t work with nonprofits, presenting a major challenge for Horizon House.

Horizon House needed to find a banking partner willing to believe and invest in its future – along with the future of the West Philadelphia community. Some banks considered this a speculative investment, especially since the $11 million bridge loan wouldn’t necessarily be contingent upon the sale of Horizon House’s current headquarters at 30th St.

Horizon House was then introduced to Fulton Bank, a Lancaster-based bank looking to expand its presence in the Philadelphia region. The new venture presented a unique and exciting opportunity for Fulton to partner with an enduring and well-respected nonprofit, while supporting the revitalization of the beloved West Philadelphia community.

Fulton Bank was ready and willing to help Horizon House reposition itself for an exciting future. The organization moved its entire banking relationship to Fulton, which provided the nonprofit with with a robust financial arrangement consisting of a comprehensive Treasury management program and a $26 million credit package, which included an $11 million bridge loan needed to become the major investors in New Market West.

Horizon House will relocate its headquarters to the new building along with facilities for expanded behavioral health services. Horizon House plans to occupy approximately 55,000 square feet of the space, bringing 200+ employees to the location, which is expected to directly benefit local businesses.

Unlike some competitors, Fulton Bank genuinely believed in Horizon House and the future of the West Philadelphia community. Fulton understood what the nonprofit wanted to do and fully invested in that vision.

While the $11 million bridge loan was anticipated to be repaid by the sale of Horizon House’s 30th St. headquarters, that transaction is still pending . But Fulton has stayed the course and remained committed to the organization by providing Horizon House with the additional financing needed until the sale is complete.

Investing in one of Philadelphia’s largest and underserved communities.

“The New Market West venture is the biggest turning point in our 65-year history,” said Jeff Wilush, president and CEO of Horizon House. “Our decision to strengthen our long-standing commitment to the West Philadelphia community would simply not have been possible without the personal and financial support of Fulton Bank. Their confidence and support in Horizon House enabled us to successfully and positively transform from our past into our future, while bringing lasting change and growth to one of Philadelphia’s largest, underserved communities.”

Horizon House successfully opened the doors to their new center on November 20, 2020. The creative and innovative partnership between Fulton and Horizon House is just beginning.

Since its founding in 1952 as a support group for former mental health patients, Horizon House has been committed to helping individuals live a fulfilling life in the community. Through the years, Horizon House has responded to the needs of individuals by broadening its scope of programs and services for adults with behavioral health needs, individuals with intellectual and developmental disabilities, and the homeless. Today, Horizon House serves more than 5,000 adults annually in Pennsylvania and Delaware.

View and download the PDF detailing the Horizon House story.

It starts with a conversation. Fill out the form below to reach one of our dedicated Relationship Managers.